The Catlin Triathlons for 2015, including the Olympic Distance National Championships, a sprint race and various junior events, were held at Clearwater on Sunday 12 April. 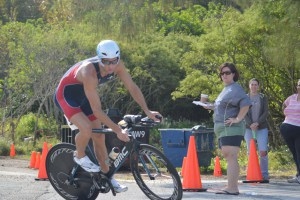 Well done to our new Olympic Distance National Champions, Jonathan Herring (pictured) and Martina Olcheski-Bell, to the winners of the other races, and to everyone who took part.

Huge thanks to our wonderful sponsors Catlin–who do so much for Bermuda society in so many ways–and to our hard-working Race Director Andrew Davis and to everyone who pitched in to help.

Full results are available on http://www.bermudatiming.bm/.

The following report is courtesy of Dave Morrison:
“Jonny Herring lived up to his reputation as pre race favorite as he dominated the field from start to finish today at the Catlin National Olympic Distance Triathlon Championships 2015 in windy and, on the run, wet conditions. Martina Olcheski – Bell’s hard work over the past few seasons paid off as she took advantage of Karen Smith’s pre race decision to withdraw after the bike due to a plantar injury, to hold off a fast finishing Julia Hawley and take her first national title.

Herring exited the water in 25 mins 32 secs for the 1500 m swim ( suggesting the swim was long) well clear of second placed Karl Wilson ( 27:06) and was never passed as he posted the fastest bike split for the 40km  in 67 minutes flat and a strong 10km run, historically his weakest discipline, of 39 :40, the third fastest of the day, to win comfortably in 2hrs 13 mins 27 secs.

Behind Herring there was a real battle for 2nd between Mark Wilcox and last year’s third place finisher, Mark Robinson. They came out of the water together but it was Robinson who pulled away on the bike with the second fastest bike split of 67 : 26 with Wilcox almost three minutes behind in 70 mins 13 secs. However, Wilcox’s stamina and never say attitude saw him reel in Robinson on the run as he posted the 2nd fastest run of the day of 38 mins 30 secs to finish second in 2 : 17 : 51. Robinson was a comfortable 3rd in 2 : 18 : 32 after a 41 mins 33 sec run. As expected Matt Thompson and Karl Wilson produced all round solid performances to take 4th and 5th respectively with the amazing Kent Richardson, at 56 years old, in 6th.

Martina Olcheski – Bell emerged from the water with Karen Smith in 27 mins 50 secs with veteran Hawley almost 4 mins back. Smith put in a 1hr 14 mins 33 secs for the bike to open up almost a 3 minute cushion over Olcheski – Bell ( 1 hr 17 mins 30 secs ) before pulling out to avoid risking aggravating her plantar injury before June’s Island Games. Meanwhile Hawley was eating into Olcheski -Bell’s lead posting a 1 : 15 : 02 bike. She then made some inroads into Olcheski- Bell’s lead on the run with a 42 : 53 run but Olcheski- Bell posted a solid 43 : 18 run to take the title in 2 hrs 30 mins 52 secs with Hawley just 27 secs behind in 2 hrs 31 mins and 19 secs. Kirsten Palmer was 3rd in 2 hrs 33 mins and 33 secs.

Erica Hawley, who next weekend races with Smith at the CAMTRI Central American and Caribbean Junior (16-19) Championships, warmed up for that event with a strong performance on a difficult course as she posted the 2nd fastest swim and third fastest run to finish in 1 hr 16 mins 05 secs, comfortably ahead of 2nd placed Amer Mehta ( 1 : 20 : 12). Megan Berry, home from college in the UK, was third in  1 hr  24 mins 58 secs.”