This year’s Bank of Bermuda Foundation triathlons took place in mixed conditions on 25 October 2015 in St George’s. The junior events, held first, enjoyed sunshine. By the time the adult event began the skies had opened up. The rain stopped before most competitors had finished the swim. However, wet roads made the cycling conditions challenging. At least it was a relatively cool and windless day.

You can find the full results attached (see foot of page and click the down arrow to download the file).

Congratulations to Tyler Smith and Erica Hawley, worthy winners of the Open category.

The two youngsters showed the benefits of their hard work this season, including participation in several high level events overseas.

Tyler finished in 1:02:43, holding off Jonathan Herring, second in 1:04:08. Tyler had the faster swim, but Jonathan bit into the lead in both T1 and the bike. There was nothing between the two when Tyler exited T2 marginally ahead, but the youngster pulled ahead on the run and ultimately won comfortably. Another youngster, the very promising Matthew Oliveira, took third place in 1:07:25.

Erica was a comfortable category among the female finishers. Her time of 1:08:22 was good enough for ninth place overall. Newcomer Eileen Mullowney was the second lady in 1:20:24. Eileen led after the swim but Erica pulled well ahead on the bike and run legs. Jennifer Wilson was third in 1:22:05, holding off young Lynsey Palmer despite the latter’s strong run.

The junior events were won by:

A big thank you to our longstanding partners in this event, the Bank of Bermuda Foundation. Well done to Race Director Ben Wright (left), ably supported by Anant Borole and Duncan Scott.

A special word for Ben, who showed his dedication by supervising the event despite the birth of his daughter the day before. No wonder he’s smiling despite the rain!

Thank you also to Bermuda Timing Systems for a job well done, to the invaluable lifeguards and the marshals who helped cheerfully in the rain, and to everyone else who pitched in to make the event a success. Last but not least, well done to Dave Morrison (right) for an expert job as race announcer (even if it does look as if he didn’t enjoy the rain much). 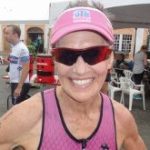 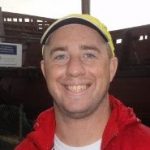 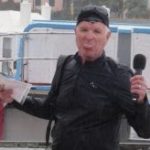 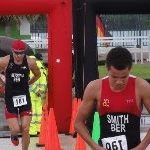 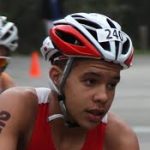