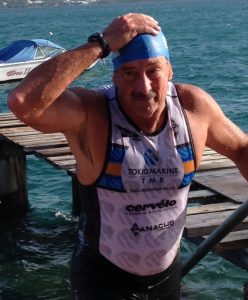 Steve Petty (left) seems to be asking himself why he does these things called triathlons! Don’t we all sometimes? But I am sure he’s still grateful to Ben Wright. Ben was kind enough to arrange this year’s Labour Day Home Triathlon on Monday 7 September 2015. Thanks also to everyone who helped him. 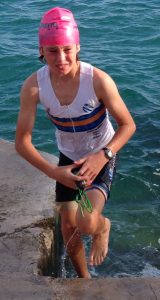 Congratulations to Evan Naude and Cora Lee Starzomski who were the male and female winners of the Labour Day Home Event at Harrington Sound School Dock. Despite a strong breeze and rain showers passing through, 19 athletes turned out for the race. Special mention to Matthew Viney and Matt Enright who completed their first sprints and to Gareth Cooper (right) who was the only junior to brave the conditions!

The results (also attached) were: