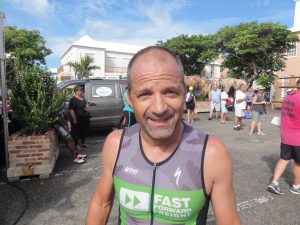 The final race of this year’s Argo Re Summer Series took place in near-perfect conditions. The only question mark was where most of the sand from Clearwater Beach had disappeared to since last Thursday.
As none of the usual superstars willing to act as a bike turnaround marshal were here tonight, we changed the bike course. The first roundabout became the turnaround–and we added an extra lap to compensate. Judging by the results, the distance must have been very similar to the usual course.

Veteran Neil de Ste Croix (pictured) won this week’s race very comfortably–and then kept running extra laps, either because he can’t count or in preparation for the world XTERRA championships. (Good luck to Neil, Laurie and our world champ Flora in those–and to Kent, who’s taking part in the cross country world race.) In second place this week was Sergio Edness, who is fast improving (and fast shrinking–have you noticed how much weight he’s dropped during this season? Wow.) David Soutter also showed good improvement, finishing third ahead of James Dodgson.

Claire McDavitt was, not for the first time, our leading lady. Laura Law was delighted by her time and second place, and has the magical 30 minute barrier well within her sights. Next season, Laura! Kirstie Jones–looking increasingly confident on the bike—narrowly edged Dawn Johnson, who is recovering well from illness and injury, into third place.

One of my greatest pleasures when organising these races is to see very young kids joining in and being closely shepherded by a parent. This week we had two. Before they finished, 8 year old Ethan Thompson put in a strong showing and quite deliberately chose to do an extra bike lap. The first of the two very young ‘uns followed, his 5 year old brother Simon Thompson, closely marshalled by Dad Matt Thompson. One 5 year old wasn’t enough–Oliver Renier also did the bike and run, with proud Dad Matthew Renier keeping a watchful eye.

Talking of Matt Thompson, I don’t know him well but I’ve noticed that he always seems to be smiling. Now that I’ve met Suzy and their kids, I can understand why!

A big thank you to Neil de Ste Croix for placing the swim buoy and to Steve O’Reilly for collecting it, and to everyone who pitched in to help with set up and break down.

Finally–have you bought your tickets for the BTA fundraiser on 2 October at Goslings Wine Bar? Details here. From chatting with Dawn, one of the organisers, I know they’ve lined up some fun stuff for the evening. See you there!